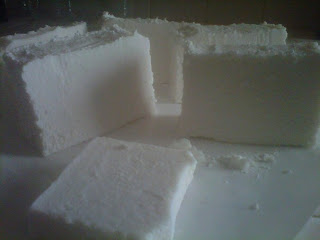 After seeing thread after thread on SMF about salt bars, I had to try one. Many posters posted that they were their favorite bar and it makes their skin feel amazing. They are usually super high in coconut oil because coconut oil is well known for it’s lather and bubbles in salt water, where salt just kills the lather and bubbles of other oils. Since coconut oil is also quite drying, you use less lye in these bars to allow more unsaponified oil to remain in the bar, called superfatting (which you do for most soap anyway, but these bars get even more). To mine, I used mostly coconut oil and added castor and grapeseed oil for even more lather and moisturizing. I did 17% superfat, and used 75% of the weight of the oils in kosher salt.

These bars need a long cure time for best results, but I used a tiny bit this morning (after testing to make sure there was no lye present of course) and it’s amazing already. It’ll be hard to wait 6 weeks for this one!

I’ve used the gardener’s bar from my last post and it is AMAZING. I added a little bit too much scrubby materials, but it works exactly how it should, scrubbing off dirt and moisturizing with good bubbles and lather and smells nice, even though I don’t usually like lavender.

My kids have decided they like my soaps too. My teenagers are exclusively using the coffee mocha HP bars I made from my first post, and they aren’t causing any issues with my son that previously could only use Ivory without going nuts from itchiness.

To market, to market…

Lookin' good! I can't do a loaf salt bar to save my life! I either wait too long to slice it and it crumbles or I don't wait long enough for it to set up and it crumbles! I now only use silicone molds with individual cavities:D

Thank you! I just recently found your blog and soap and love them 🙂 Thanks for stopping by!

I have also just discovered salt bars and absolutely love them too. I so understand what you said about waiting and how difficult it's going to be. I have also started using a tester and it feels wonderful already. I have so far made two salt bar batches and one disaster… don't mention that one 🙂 I posted on forum about my experience… http://apps.facebook.com/facebook_forums/soaperscrafts/

Thank you for a wonderful post and beautiful soap…

Patrice, I waited about one hour before slicing it! I also used a high percentage of coconut oil.

Learn more about us and this website, check out our handcrafted soap and other skin care products that we sell, check out some of our favourite recipes (with more being added all the time), and watch us grow into chickens, goats, sheep, and more through 2020 and beyond!